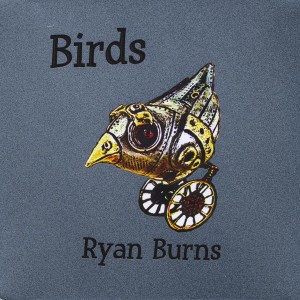 This is Ryan Burns’ third CD effort for OddBird Records, but first electric album as a leader. Burns electronic keyboard work has been featured in groups Harrybu McCage (with drummer Matt Cameron of Pearl Jam/Soundgarden) and award-winning Groups Matt Jorgensen +451, Thomas Marriott’s Wille Nelson Project, and Bebop and Destruction. “Birds features 6 new original compositions by Burns, and one by bassist Geoff Cooke. Cooke and drummer Jose Martinez both appeared on OddBird CD “Tree-O” as an acoustic piano trio. Here are what a few critics have said about Burns’ keyboard work:

“On Fender Rhodes, Ryan Burns re-minds listeners that the instrument was one of the
most successful attempts at an electric, piano-like sound. And, while it can sound retro-hip now,
it also can be hip, plain and simple, and that’s a far more worthy accomplishment.”

“…in the wake of all the good that Weather Report and Miles Davis had done
for jazz electronification, he generally steers well clear of what are, at this remove, its many cliche’s.”
-Peter Monaghan, Earshot Jazz

“…with keyboardist Ryan Burns pulling wah-wah guitar sounds out of the ether, or maybe it’s his Fender Rhodes,
though I’ve never heard those sounds from one before.”
– Dan McClenaghan, All About Jazz