My 2020 release “Postponed Parade” was nominated for a Golden Ear Award “NW Recording of the Year” by Earshot Magazine in 2020, and my group, Ryan Burns, WON “Alternative Jazz Group of the Year.”

Thanks to Earshot Jazz, KNKX, all the musicians and engineers that participated, plus those that gave us a gig in such a weird time: Avennia Winery, Loudswell, Nancy Guppy Art Zone, and Royal Room.

Here is the write-up in the April 2021 issue by Paul Rauch:

Keyboard wizard Ryan Burns has long held a reputation for being a bit of a musical mad scientist. His work early on with Matt Jorgensen +451 featured his work on a variety of electric keyboards, from Rhodes to vintage Moog. With his roots planted firmly in the jazz piano tradition, Burns has taken his considerable chops into a variety of musical worlds. When the pandemic hit, Burns conceived of a way to use technology to make a high quality recording completely remotely, with each participant sequestered in their own home studio.

With the seven Burns originals released as singles at first, Burns assembled the tunes into an independently released album titled, Postponed Parade. The project is one of the truly remarkable tales to tell of the past year on the Seattle jazz scene. It shines as a triumph of creative intuition under the weight of arduous social circumstances.

“I’m humbled and appreciative,” said Burns. “This inspires me to keep making music with my friends.”

Postponed Parade is a full length LP available on vinyl, CD and digital formats. It is a collection of quarantine singles all recorded and released from May to October 2020 involving over a dozen musicians, additional engineers, and cover art from Jason Chatfield (New Yorker, MAD Magazine).

All tracks were recorded in each other’s houses during quarantine, except “Shoreline,” drums for “Night School” and percussion for “Subdued Mood” (recorded at Jack Straw Studios).

All songs written by Ryan Burns Copyright 2020 all rights reserved

Get yours on BandCamp!

Up & Up is a funky organ group track featuring an analog synth battle at its climax, sandwiched in between stellar solos by Skerik, Jeff Fielder and Max Holmberg.

With a bright, fun, and groovy feel, Postponed Parade is the celebration we need! Ryan Burns’ masterful composition and the stellar deliveries that he and his allies have captured and assembled provide a much needed reprieve from the cloying atmosphere of isolation, and the jazzy sensibilities that permeate Postponed Parade make it a one-of-a-kind sonic experience – just in time for the summer holiday! – reviewer Jon Wright

Recorded in each other’s homes during quarantine.

POSTED ON May 03, 2020
This funky B-3 Organ Trio track features Ryan Burns, hammond organ, fender bass; Max Holmberg, drums and Cole Schuster, guitar. It was recorded in each other’s houses during quarantine. It is available for $1 or donation on Bandcamp.

Ryan Burns Song Book – Piano Compositions is NOW AVAILABLE! 14 tracks, all original. Mostly solo piano, plus some amazing new tracks featuring African percussionist Thione Diop. A companion book of sheet music is in the works. Check it out on my Recordings page: http://ryanburnsmusic.com/recordings/ 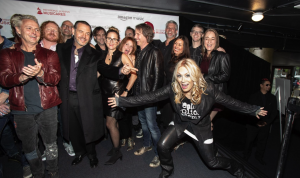 Recently played a MusicCares benefit at the Showbox. This picture was in the Seattle Times. Mike McCready was presented the Stevie Ray Vaughan Award. I got to perform with Nancy Wilson (Heart), Duff MacKagan (G & R), and Chad Smith (Red Hot Chili Peppers), along with the bands Flight to Mars and Shadow.