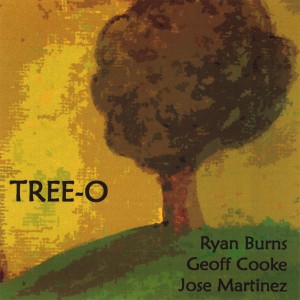 Pianist Ryan Burns, bassist Geoff Cooke & drummer Jose Martinez have played together for about a decade. They have each had their turn on the national scene and continue to play with many heavy players. When they get together, they have a remarkable chemistry that comes through in their music. This is a chance to hear them play some of their original music. Pretty much straight ahead jazz, some of these tunes have become standard requests when ever they play. Two of the tracks presented here were written by Geoff Cooke, who made his debut as a leader with the 2000 recording “See You at the Bridge.” The rest of the compositions on TREE-O were written by Ryan Burns. “…top-notch piano trio disc with style and reverence.” (Dan McClenaghan – All About Jazz)

All songs by Ryan Burns copyright 2007 except for Tracks 3, 5 by Geoff Cooke

Engineered and mixed by Steve Smith