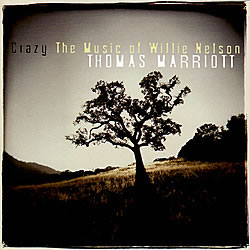 Thomas Marriott is one of two first-tier trumpet players to come out of Seattle in the last decade. The other is Cuong Vu. Marriott is the more “inside” of the two, but not by much. Crazy is creatively off-the-wall. It is also a sincerely affectionate tribute. Marriott does not offer bebop versions of Willie Nelson songs but uses them to provoke extravagant acts of the imagination. Some (“Phases & Stages,” “You Wouldn’t Cross the Street”) are freely reharmonized. Another (“I’m Building Heartaches”), hollered contrapuntally by Marriott and soprano saxophonist Mark Taylor, sounds like a Nelson melody arranged by Ornette Coleman. Marriott has serious chops and a luxuriant trumpet sound that he sometimes splashes through a digital-delay system. His group concept is to let the dogs out. His sidemen run wild over country and western. Taylor’s soprano brays amid the rasping densities created by Ryan Burns’ Moog or Fender Rhodes. Matt Jorgensen’s drums surge and storm.

The best pieces are “Crazy,” with a lilting, sweet, only slightly ironic Marriott solo and a middle section that goes officially but briefly crazy, and “On the Road Again,” a song about happy times on tour. Marriott was on the road with Maynard Ferguson and Rosemary Clooney and “hated every minute of it.” He turns the piece into a mordant, deadpan dirge. This album is a kick in the pants.