Burien School of Music and Art Opens With Sold Out Event 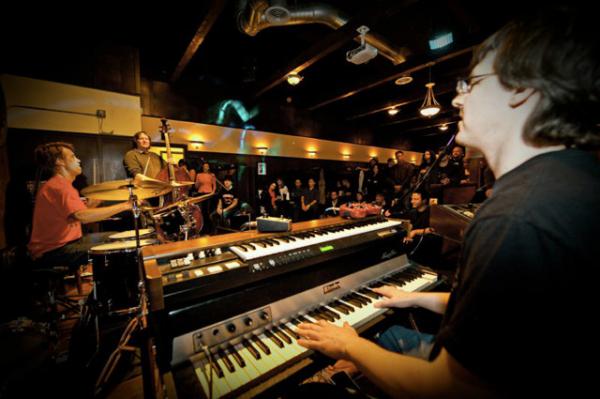 Next up was Three Tree Point Blues Band, a classic rock cover group with deep Burien roots. The group heavily featured the vocals of Jamie Phalen and guitar work of Jack Johnston, performing numbers by Santana, Allman Brothers, and others, with guest vocalist/guitarist Glenn Cannon (Windowpane) sitting in on Hendrix’s Voodoo Child with Burns on hammond organ, and bassist Joe DelGreco and drummer Todd Anderson.

Zack Static Sect played 3rd at about 11pm. An original punk/grunge band, their set turned the dance floor into a mosh pit. The group consists of Zack Static (who also hails from Burien) on guitar and vocals, bassist Joe Focault, and drummer Alex Vincent (Green River). The group also brought Burns to the stage to play guitar on their hit single “Pass Me By.”

Keyboardist Ryan Burns’ new group will perform at Tula’s Nightclub in Seattle, Wa Thursday March 11, 2010 in conjunction with Burns’ first electric CD as a leader. The recording “Birds” (2010 OddBird Records) prominently features analog keyboards such as Fender Rhodes, Hammond Organ, and Moog Synthesizer. The recording of all original material also features bassist Geoff Cooke, drummer Jose Martinez, and saxophonist Mark Taylor. An acoustic 1st set starts at 7:30pm, and the 2nd set will be electric, with lots of material from the CD.

Goessl/Taylor/Zgonc/Burns to Perform at Tulas

GTZB (Goessl/Taylor/Zgonc/Burns) will perform at Tulas Nightclub in Belltown (Seattle) on Monday, February 8, 2010. GTZB debuted at 2009 Bumbershoot Festival of the Arts under the leadership of award-winning saxophonist Mark Taylor (Earshot Jazz Instrumentalist of the Year 2008). The group consists of Jason Goessl, guitar; Mark Taylor, saxophones; Ryan Burns, keyboards and Tom Zgonc, drums. The music is original material with some Mingus, Monk, Bill Evans thrown in. Modern jazz with an edge.

You’ve decided you want to play piano. You’ve chosen a teacher, have a lesson coming up and don’t want to go in cold. Or you’ve tried to learn with books and online tutorials, and decided you need some one on one instruction with a live person. for a beginner, the first lesson almost always entails these three things:

So this should give you a head start, whether you want to jump in and practice before your first lesson, or if you just wanted to know what to expect at your first lesson. Fingerings are very important, especially in the beginning while you are first learning. If you have been trying to learn on your own, I’d recommend paying close attention to fingerings. The best thing you can do is get with a good piano teacher from the start, so you don’t start bad habits that you may not recognize on your own.